Perfect Day for a Wedding! 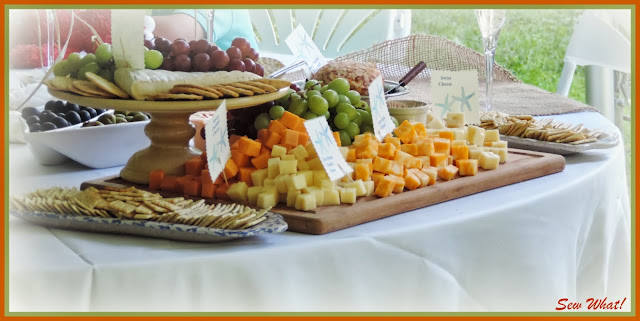 It was one "heckuva" busy week last week which was why I was not able to spend much time in blogville . I was out of town three of the days and attended a funeral Friday morning.

After the funeral, at around 1:00 pm I began helping my neighbor decorate for her backyard, ocean themed wedding which was Saturday. We spent the afternoon and early part of the evening decorating the ceremony area with with tulle and making centerpieces for her tables under the big white tent. Later that evening I enjoyed a girl's night out with the bride and two of her friends. It was a lot of fun, laughs and margaritas! 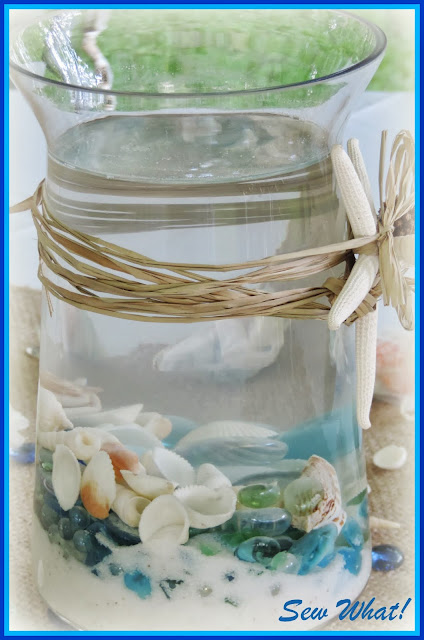 We made 4 of these centerpieces which later held battery operated floating candles. They looked beachy and beautiful sitting on burlap runners on each of the round dining tables and so pretty lit up after dark.

I got home at 10:30pm and began cutting up various cheeses for the cheese and cracker platter I was bringing for an appetizer. I had two kinds of cheddar, some brie, colby-jack, swiss and a cheddar nut cheese ball. I added an assortment of crackers and some green and red grapes. In the morning I put it together before heading back over to finish setting up.

The weather for the wedding was PERFECT! We could not have ordered a more beautiful day! It was sunny, warm, lots of blue sky and no humidity!

It was a small gathering of about 40 people and very casual. The buffet following the ceremony had some catered dishes as well as some dishes that were prepared by the bride and some of her friends. It was delicious!

It was one of the most enjoyable weddings I have ever been to because of the number of guests and the casual, intimate atmosphere. No uncomfortable shoes or pantyhose either!!! I wore flip flops!!!!

I am so happy for my neighbor! We have lived next door to each other for over 20 years! We have walked many miles together, swam many laps together and laughed many laughs together. I will admit I got a bit teary-eyed when the music began to play. The bride, escorted by one of her sons, walked down the aisle to A Thousand Years. Just beautiful!

The bride and groom seem to be meant for each other and I wish them all the happiness in the world! So, to them....Cheers!...and a thousand more years!

"I think a lot of people get so obsessed with the wedding and the expense of the wedding that they miss out on what the real purpose is. It's not about a production number, it's a meaningful moment between two people that's witnessed by people that they actually really know and care about."
Jane Seymore