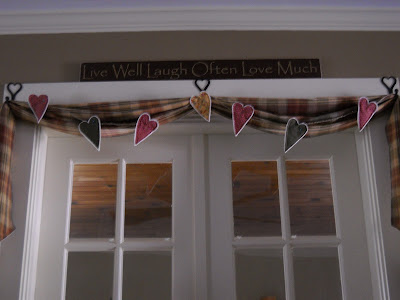 Love the way the heartstring garland  looks over my double door!

I have not accomplished much today much to my disappointment. I had planned an entire day of sewing--well at least cutting, for my quilt project that I have pledged to complete before summer's end. But circumstances did not cooperate and the day time has gotten away from me.

My beautiful dog Willie, is a black lab/newfie mix we believe. We adopted him seven years ago from the local Humane Society. We brought him home,  he ran into the room that I am in now and he greeted my husband with a handshake. It was from that point on, TOTAL LOVE AND AFFECTION for that dog. 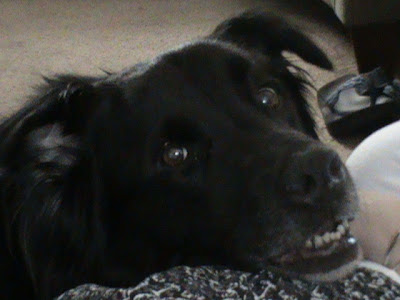 Last summer he was diagnosed with a very aggressive form of bone cancer in his front leg and we were told we would have him six months at the longest. We were devastated. I am happy to say that he is doing quite well and little has changed--even the growth of the tumor. But last summer when I thought we would not have him for long, I began to sleep with him and we spoiled him rotten. One year later, you can probably well imagine what we have on our hands-- one, very large, 106 lb spoiled dog that makes the "terrible twos" look like a piece of cake. 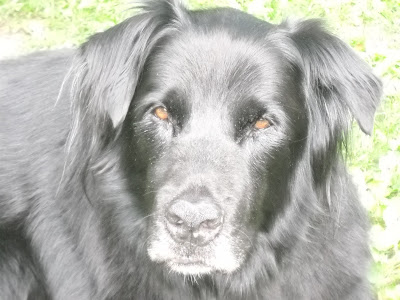 At any rate, I have been alone for two days with him while my husband and daughter are at a Revolutionary War reenactment and last night he did not want to go to sleep. He did not want me to go to sleep either. He wanted to go out, then he wanted to play (at 1:20 am), he started barking outside and I was afraid he would wake up the neighbors. I tried to bribe him in with hot dogs, hamburg, cheese--nothing worked. By 3:30 am I was in a very foul mood. I grabbed his gentle leader and his leash and I went out, hooked it to him and basically dragged him in. He was thirsty so I filled his dish and went to bed. He started to bark at the fridge--he wanted ice in his water!

By 4:15 am I finally got him settled down and at 5:45 I was awakened  by his whisper of a bark. When we are sleeping, he barks very quietly to wake us and if we don't respond he begins to bark louder and louder. I couldn't deal with " loud" after so little sleep so I admitted defeat and got up with him.


Today I am tired, did not start my quilt and need a break from my dog. Thankfully, my husband and daughter are on their way home so Willie can lead someone else around by the collar. I know, we definitely have something backwards here! But we love him to pieces. He is a sweet lovable boy. I have never seen such an affectionate dog. He just tugs on my heartstrings so....even if he is a bit naughty.

Ironically, that is the project I worked on today....heartstrings--or rather a scrappy, heart garland that can hang over a door, a window--wherever. I cut the hearts out last night and today I sandwiched cotton batting between the hearts and stitched them up. They are only pinned to the twine. I can finish it tomorrow. My heart isn't in it today.


"Folks will know how large your soul is by the way you treat a dog."
Charles Doran